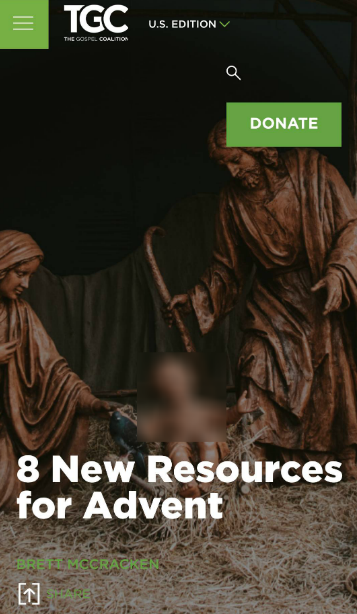 “Exegeting the culture” and addressing cultural issues is increasingly popular in Reformedish circles. Pastors, authors, and bloggers seek to explain the wider culture, warn Christians of dangerous trends and temptations, suggest biblical ways of cultural engagement, and encourage a biblical worldview for believers. Reformed and Calvinistic thinkers seem to believe they have something significant to offer in these areas.

Dominating all this cultural exegesis and engagement in the Calvinistic corner of evangelicalism is The Gospel Coalition, a parachurch organization formed in 2005 by D. A. Carson and Tim Keller. With 16 million unique visitors and 75 million page views in 2016 TGC's website is uniquely influential among the so-called YRR (young, restless, and Reformed) crowd. This “coalition” – actually a self-governing, independent organization with a self-appointing council of pastors and elders – styles itself as “a fellowship of evangelical churches in the Reformed tradition”.  While not a denomination, TGC has a confessional statement and a catechism, a church directory and a job board.

For the independent congregations that make up the bulk of “TGC churches” it is understandable that some might look to TGC and its council for leadership. For actual Reformed churches – those connected to confessional denominations – TGC ought to be superfluous, and these churches cannot be in “fellowship” with TGC-affiliated churches in the same way that they are with the churches of their own denominations. Individual members of those churches, of course, are free to make use of TGC's voluminous editorial output as they see fit. And they do by their millions.

As the cultural exegetes must surely agree, an organization's use of images, technology, and messaging strategies is fair game for critics. What follows is my attempt to critique some of the ways TGC uses images and innovates. The standard will not be something I learned in business school, the standard will be the confessions of the Reformed churches.

My concern here is not really with Reformed churches as such (which cannot actually align with TGC) or with members (who are free to consume as they will). It is with the officers (elders and pastors) of confessionally Reformed churches who participate in TGC leadership, given the fact that TGC's content so strongly influences the one culture that really matters, the one culture that truly ought to be ordered according to the Bible – the household of faith, the church of God.

My concern is that the officers of confessionally Reformed churches (basically those from denominations affiliated with the North American Presbyterian & Reformed Council – NAPARC) who sit on the TGC council are giving their stamp of approval to some things that are specifically forbidden by the Bible, the Reformed confessions, and the historic practice of the Reformed churches.

The TGC web page over the recent Thanksgiving weekend provided a notable example of TGC-endorsed aberrant practices. The front page of the site used an image of a nativity scene (with the second person of the Trinity supposedly represented) in support of an article on “8 New Resources for Advent”. This is not an isolated instance. Pictures of Jesus and commendations of movies and materials depicting him are nothing new at the TGC web site.

What specifically is wrong with images of Jesus? Well, simple logic tells us that any image of Christ is necessarily a lie – the Bible is not a picture book. No image of Christ can be accurate. Can inaccurate images be a help to those who view them? Some will argue that serve an essential pedagogical use when it comes to children. Some, as were heard at the last General Assembly of the Presbyterian Church in America, will argue that we cannot appreciate the humanity of Jesus without images.

The Westminster Larger Catechism, to which the presbyterian ministers on the TGC council have taken vows of subscription, would seem to speak both to images of Christ and things like Advent in question 109: 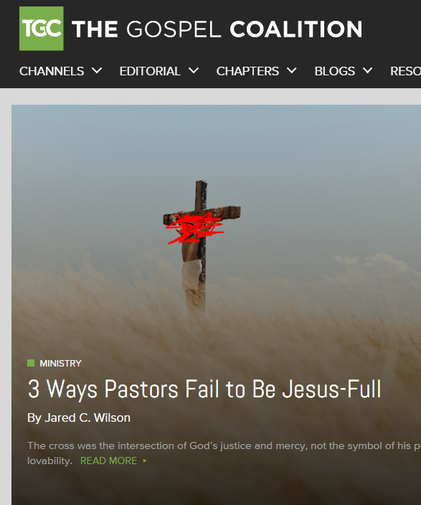 Q. 109. What sins are forbidden in the second commandment?

A. The sins forbidden in the second commandment are, all devising, counseling, commanding, using, and any wise approving, any religious worship not instituted by God himself; the making any representation of God, of all or of any of the three persons, either inwardly in our mind, or outwardly in any kind of image or likeness of any creature whatsoever; all worshiping of it, or God in it or by it; the making of any representation of feigned deities, and all worship of them, or service belonging to them; all superstitious devices, corrupting the worship of God, adding to it, or taking from it, whether invented and taken up of ourselves, or received by tradition from others, though under the title of antiquity, custom, devotion, good intent, or any other pretense whatsoever; simony; sacrilege; all neglect, contempt, hindering, and opposing the worship and ordinances which God hath appointed. (http://opc.org/lc.html)

Now, I am aware that there are officers who take exceptions (where allowed) to portions of this section, especially concerning mental images. I am aware that some presbyterian bodies have in the last few decades allowed loose or “system” subscription to confessional documents. Still the question must be raised: Should a NAPARC church officer sit on a quasi-ecclesial body's board when that that body condones and promotes violations of the second commandment as defined by the confessional standards of the officers' own denominations?

One assumes that motives to become involved with TGC were good ones. What did NAPARC officers who agreed to serve on the TGC council hope to achieve? It may be that they hoped to steer the rag-tag group of  four-to-five-point Calvinists (ranging from Anglicans to charismatics) in a more Reformed direction. If that was the goal it is now evident that the project has failed. Anyone who has followed TGC's output for the past several years can see that they are becoming broader, not more Reformed, especially as regards ecclesiology and worship. Many will protest that TGC is “gospel-centered” and that soteriology is the main concern. Confessional churchmen ought to respond that the gospel is never to be divorced from the law of God or the church of God.  Worship is not a secondary concern. Remember Calvin's words from “The Necessity of Reforming the Church” (1543):

"If it be inquired, then, by what things chiefly the Christian religion has a standing existence amongst us, and maintains its truth, it will be found that the following two not only occupy the principal place, but comprehend under them all the other parts, and consequently the whole substance of Christianity: that is, a knowledge, first, of the mode in which God is duly worshipped; and, secondly, of the source from which salvation is to be obtained. When these are kept out of view, though we may glory in the name of Christians, our profession is empty and vain."

Yes, in this case Calvin put proper worship before soteriology. Scholars increasingly agree that concern for proper worship (which included the removal of images from the life of the church and the abolition of man-made additions to worship) was the driving force for the early Reformers who, I fear, would be troubled by the modern encroachment of images and the recycling of traditions such as Advent. In question 110 the  authors of the Westminster Larger Catechism show a level of concern for worship comparable to Calvin's, saying that God has a “fervent zeal for his own worship...revengeful indignation against all false worship, as being a spiritual whoredom” and that He considers “breakers of this (2nd) commandment such as hate him.”

Whether the goal of coalitional involvement is to help Calvinistic evangelicals become Reformed churchmen, to transform the culture of cities or the nation, or to foster cooperation for evangelistic efforts, these good things cannot justify the setting aside of commandments or departure from bibilcal worship.

Lately there is much talk among TGC writers and council members of moving beyond silly evangelicalism and setting aside shallow cultural Christianity. There is merit in those ideas. However, TGC's laxity on the second commandment and their tendency to uncritically embrace fads like Advent (and even Lent) reeks of two of evangelicalism's weakest tendencies – pragmatism and sentimentality.          -- CW
Clarification: I understand that decisions to use images of Christ are probably made by staff members, not council members. However, it seems that no direction or correction is being given about this issue. And the buck should stop with the council members, not the webmasters. This use of images is directly and obviously in conflict with the confessional standards of a sizable minority of the council members, and I don't believe they should stand for it. The use of images is not necessary to further the goals of TGC, and I see no way that anyone involved with TGC can defend the practice biblically.
-----
​These issues have been discussed on two Presbycasts:
https://soundcloud.com/presbycast/holiday-survival-guide-dont-be-ricky-bobby
https://soundcloud.com/presbycast/accidental-protestants-unauthorized-imagessoundcloud.com/presbycast/accidental-protestants-unauthorized-images
​This post contains a number of helpful links:
https://heidelblog.net/2017/11/with-presbycast-on-christmas-pictures-and-ricky-bobby/ 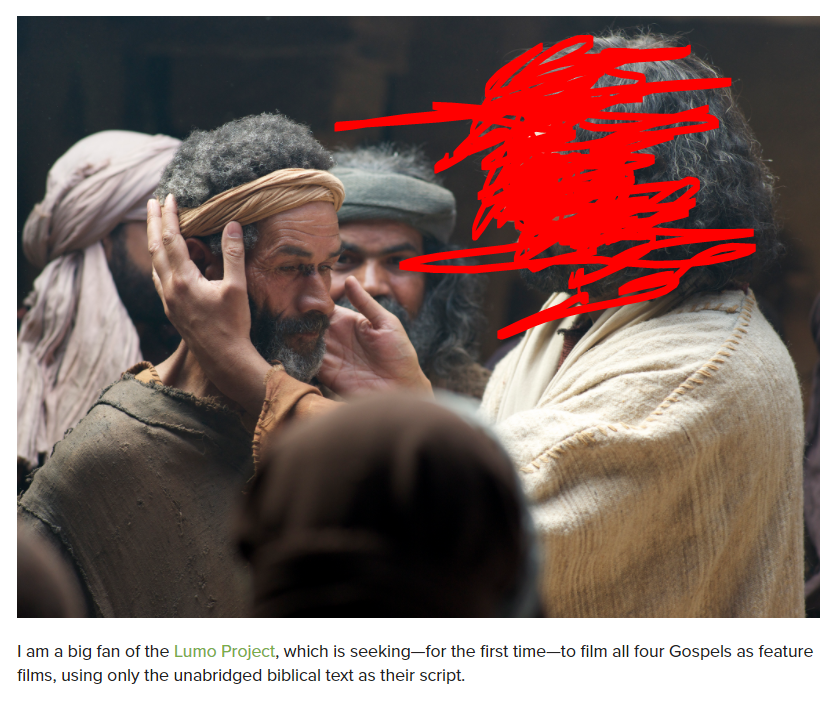 (Screen capture from the TGC website, 8/28/2017) -- https://www.thegospelcoalition.org/blogs/justin-taylor/the-amazing-lumo-project-filming-all-four-gospels-as-feature-films-using-only-the-unabridged-bible-as-the-script/
Powered by

Create your own unique website with customizable templates.
Who the heck is Chortles Weakly?